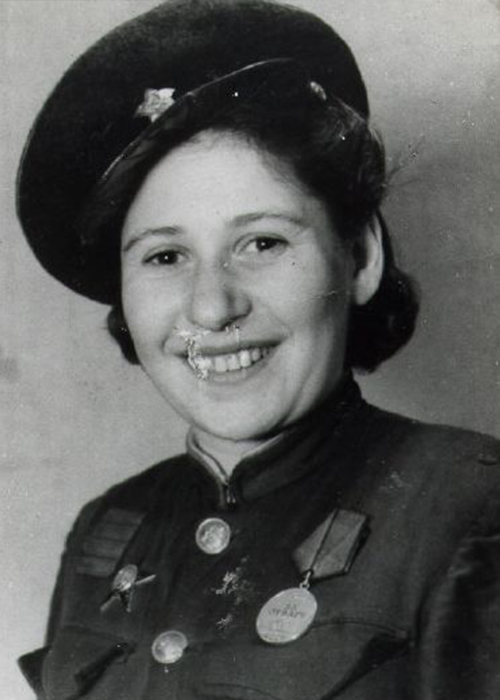 Daughter of Moshe Felenbaum. In January or February 1940 she was deported to a labor camp in Siedliszcze near Helm, where she was engaged in land reclamation. There she met the future prisoners of Sobibor Zelda Kelberman (Metz), Regina Feldman (Zelinsky), Esther Turner (Raab). Contracted typhoid fever; the camp doctor hid her in the basement and cured her with alcohol. Later it was transported to Wlodawa, and from there on a horse-drawn cart, on December 20, 1942 it was transported to Sobibor. During the trip, the Hella brothers tried to escape – the youngest was killed, the eldest managed to escape, but he did not live to see the end of the war. Parents were deported to Sobibor from Wlodawa in November and died in a gas chamber.

In the camp she knitted SS gloves, socks, sweaters. Worked in the laundry and ironing. “Because of the hunger that we experienced, I was thin and short <…> Carpenters made a small bench for me, and when I heard that the SS man was approaching the door, I got up to look a little taller and older.” It was later transferred to a sorting hut, then looked after flowers.

After October 14, she hid in the forest for several months along with other prisoners of Sobibor, including with Abraham Margulis, and five Red Army soldiers who escaped from captivity. Later she entered the reconnaissance and sabotage detachment of the NKVD “Okhotniki” under the command of Nikolai Prokopyuk. Since October 1, 1944 in the Red Army. “The Russians sent her for six weeks to a special school where she studied German weapons, mine rules and the foundations of Marxism-Leninism” (Raschke, p. 252). She was a nurse of the sanitary company of the 897th Mountain Rifle Order of the Sevastopol Suvorov 3rd degree regiment of the 242nd Mountain Rifle Taman Red Banner Division of the 3rd Mountain Rifle Carpathian Corps of the 4th Ukrainian Front. According to her, she took part in the mining of railways and bridges. By order of the regiment No. 03 / n of February 7, 1945 she was awarded the medal “For Courage” for participating in the battles in the Carpathians (TsAMO. F. 33. Op. 690306. Unit of Christian Unit of Art. 1951. Record No. 41703318, L. 437). During fights in the area of ​​settlements Kraskovec and Gožice in Polish Silesia on April 15-22, she performed the duties of a medical officer at the regiment headquarters; “In the most difficult combat conditions, she was at the command post of the regiment, providing first aid to the wounded, while showing attention and care.” April 19 “was slightly wounded, but remained in service” (previous wound – December 1, 1944). She was awarded the Order of the Red Star by order of Division No. 022 / n of May 4, 1945 (TsAMO. F. 33. Op. 686196. Unit 320. Record No. 22722787. L. 48, 60; in the orders for rewarding is listed as Filimbaum or Filenbaum Hella Moiseevna).

In Czechoslovakia, she met her future husband – a fighter of the 1st Czechoslovak Army Corps under the command of Ludwik Svoboda. The couple emigrated to Israel, where they opened a cafe. Three daughters were born in the marriage.

She refused to act as a witness at trials against SS men from Sobibor, not wanting to come to Germany. She agreed to testify only at the trial of Karl Frenzel in Hagen in 1983.