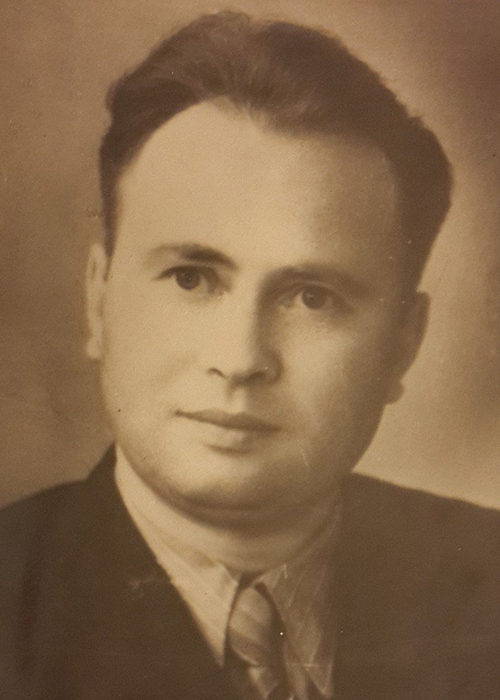 Born in a Jewish agricultural settlement in a peasant family. Father was shot in 1938 for participating in the Zionist circle in the early 1920s (rehabilitated in 1960). In 1939 he graduated from Kalinindorf ten-year school with teaching in Yiddish. He worked in a tractor brigade. In 1940, drafted into the army. From the first days of the war he participated in battles as part of the 123 rifle regiment of the 62nd division of the 5th army. He was slightly injured.

Near Kiev on September 15-18, 1941 he was seriously wounded (a leg was broken below the knee) and was hospitalized. After the capture of Kiev by the Germans, he was captured and was taken out with the entire hospital to Gomel, then to Bobruisk, and from there to Minsk. In captivity he called himself the name of his mother – Kiselev. In March 1942 he was “exposed” as a Jew, transferred to Stalag 352 in the village of Masyukovshchina near Minsk (spent about a month there in the punishment cell – the so-called “Jewish basement”), and then to the SS working camp on ul. Wide in Minsk. September 18, 1943, together with Alexander Pechersky and other prisoners of the camp on the Broad and Minsk ghettos (about two thousand people in total) were deported to Sobibor. In Sobibor since September 23. During the October 14 uprising, along with Yehuda Lerner, they hacked Siegfried Greattschus, the head of the camp guard of Untersturmfuhrer SS, and a guard named Klyatt with axes in a tailor’s barrack.

On the night of October 19 to 20, along with eight other participants in the uprising, including A. Pechersky, crossed the Western Bug and ended up on the territory of Belarus. He became a machine gun, then commander of the machine gun department of the partisan detachment named after Frunze of the Brest formation. After the detachment joined the Red Army (April 1944) in 222 spare rifle regiment 70 of the Army 2 of the Belorussian Front (commander of the machine gun training platoon). By order of the regiment No. 93 / n dated March 20, 1945 he was awarded the medal “For Courage” (TsAMO. F. 33. Op. 686196. Unit 5634. Record No. 27534863, l. 392ob.). He came to the front when crossing the Oder (in April-May 1945 – in 199 separate reconnaissance divisions of 165 divisions). He was demobilized in 1946 by the foreman of a machine-gun company of the 314th Guards Rifle Regiment.

Mother and younger sister were shot by the Nazis in Beaver Kut in September 1941, the older brother died at the front. He graduated from the Zaporizhzhya Institute of Agricultural Engineering (1951). He worked at the factory. The 20th anniversary of the October Revolution in Voroshilovgrad (until 1953), the Starodub MTS of the Bryansk Region (until 1957), the chief engineer of the Artyomovsk Mechanical Repair Plant (Donetsk Region).

In 1953 he met with A. Pechersky in Voroshilovgrad, but regular communication with him and other former prisoners of Sobibor began in 1962, after the publication of the article by L. Druzenko and V. Tomin, “The End of Sobibor” (Komsomolskaya Pravda, January 12). In October 1963, he celebrated the 20th anniversary of the uprising in Rostov-on-Don (with A. Pechersky and S. Rosenfeld), attended all subsequent meetings of the Sobiborets who lived in the USSR.

Since 1987, retired. In 1994 he moved to Kiev. He was married (since 1947), had two sons. Cavalier of the Ukrainian Order of Merit III degree (2016). Laureate of the “Violinist on the Roof” award of the Federation of Jewish Communities of Russia in the nomination “Legend-Man” (2016).