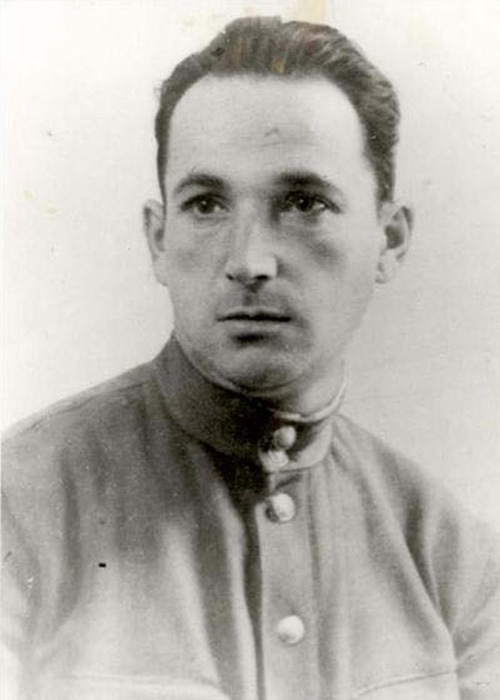 The son of an assistant to the lawyer. In 1915 the family moved to Rostov-on-Don. After graduating from a seven-year school (1925), he worked as an accountant at the Mospogruz enterprise (1925-1926), in the artel of the disabled (1926-1930), at the Lenzavod (1930-1931). After military service in the Red Army (held in 1931-1933 in the Rostov Military Commissariat) until 1935 he served in the quarter of the 9th Don Division and the cart part of the North Caucasus Military District. In 1935-1941, an inspector of a household unit at the Rostov Financial and Economic Institute (RFEI); led the amateur initiative.

Since June 23, 1941 at the front. He served as senior clerk, since September – in the production department of the headquarters of the 596 corps artillery regiment of the 19th army. In September 1941 he received the rank of quartermaster technician of the 2nd rank (corresponds to the lieutenant rank). Captured near Vyazma on October 12, 1941. He was in prisoner of war camps in Vyazma and Smolensk. He suffered from typhus, in May 1942 he tried to escape, but was caught and sent to a camp in Borisov, and on August 10 – to Minsk. There he was placed in stalag 352 in the village of Masyukovschina, where he was identified as a Jew, after which he was first imprisoned for nine days in the so-called. “Jewish basement”, and on August 20 transferred to the SS working camp on the street. Wide. September 18, 1943, together with other Jewish prisoners of war and prisoners of the Minsk ghetto (about two thousand people in total) was deported to Sobibor. In Sobibor since September 23. He passed himself off as a joiner. A few days after arrival, he met Leon Felgendler and began developing a plan for rebellion and escape. The organizer and leader of the uprising on October 14.

A few days after the uprising, along with eight other Soviet prisoners of war, the Western Bug crossed and ended up on the territory of Belarus. He joined (October 22) in the partisan detachment named after Schors of the Brest Union. After the merger of the detachment with the Red Army on April 25, 1944 – in the officer company of the 222nd Infantry Regiment of the 49th Infantry Division, from May 16 – in the 29th Reserve Officer Regiment at the 1st Belorussian Front, stationed in Ovruch, Zhytomyr Region. There he writes the first version of the memoirs of Sobibor. From June 26 to July 3, as an officer, who was held captive, he was in the special camp of the NKVD No. 174 in Podolsk for verification, as a result of which on July 29 he was enlisted as a machine gunner in the 15th separate assault battalion. He fought on the 1st Baltic Front; wounded in the thigh in a battle near the town of Bauska on August 20. Until the end of January 1945, he was treated in evacuation hospital No. 2660 in the village of Shchurovo, Kolomensky District, Moscow Region, from where he sends information about Sobibor to the Council of People’s Commissars and the Extraordinary State Commission for the Establishment and Investigation of the Crimes of the Nazi Invaders and Their Companions (ChGK). From February 3, he became the head of production at the headquarters of the Novocherkassk 199th working battalion (according to other sources, from December 1944 to June 1945 he was in the officer regiment of the reserve of North Caucasian Military District in Novocherkassk). In June 1945 he was transferred to the reserve. In the spring of 1945, his book “Uprising in the Sobiburovsky Camp” was published in Rostizdat (circulation of 5 thousand copies). The Yiddish version was released in 1946 by Der Emes, a Moscow publishing house; this version will be translated into Polish (1952) and English (1966). Subsequently, several times he rewrote his notes on Sobibor, but it was not possible to publish a new edition in the USSR.

In 1945-1948 – Deputy Director of the RFEI for Economic Affairs. In 1948-1951 – head of the Bureau for the organization of work with the audience, in 1951-1952 – Commissioner for distribution of tickets to the Rostov Theater of Musical Comedy. In 1952 he was dismissed from the theater and expelled from the party (member of the CPSU (b) since 1947) on charges of financial abuse in the sale of theater tickets. Sentenced (January 10, 1953) to 1 year of forced labor with a deduction of 25% of the salary. In February-October 1953 he worked as a charioter in the “3rd Five-Year Plan” artel. From June 1954 until the mid-1960s – baguette separator, foreman at the Bagetchik artel (later – the baguette workshop of the Rostmetiz factory); was chairman of the friendly court and production meeting of the plant. In 1961-1962 – deputy of the Kirov District Council of Rostov-on-Don. Last job – mechanical (machine-building) plant.

Since the late 1950s, he has been actively looking for his comrades in Sobibor, organized meetings of former prisoners who lived in the USSR, collected materials about the camp, corresponded with foreign historians and journalists, spoke in the press, at various public events, in schools, etc. Repeated attempts by Pechersky to obtain permission to temporarily go abroad (including to Poland to open a monument at the camp site in Sobibor in 1965 and to the US for the premiere of the feature film “Escape from Sobibor” in 1987) were unsuccessful. In 1984, in Donetsk, he testified to German investigators when considering the appeal of SS officer Karl Frenzel, commandant of the first camp in Sobibor.